Node-RED 0.15 is now available to download or npm install.

If you are using the pre-installed version on Raspberry Pi Jessie, the repositories will be updated in the near future.

It’s now possible to manage your palette from within the editor. This lets you browse a catalogue of all available nodes and install any of them without having to restart Node-RED.

Under the covers, this triggers an npm install of the node module into your user directory - by default, $HOME/.node-red. Note that if the node has any dependencies beyond the standard npm dependencies, you’ll need to resolve them manually. It also requires you to have npm installed, which, if you’re using the Raspberry Pi preinstall image, you may not have - check the docs for how to get it.

Having let you reorder your workspace tabs in the last release, we knew there was more to be done. A common complaint was how the editor handled flows with lots of tabs; we would squeeze them all into the view making it virtually impossible to jump to the right tab first time. It also made the Flows menu unusable as to grew beyond the bottom of the page.

With this release, we now behave much more sensibly and allow the tab bar to scroll so the tabs never become too small. That ensures their labels are always legible. We’ve also removed the list of tabs from the Flows menu.

But wait a minute, I hear you say, how can you quickly navigate between tabs if they are now scrolled off screen and there’s no menu entry? Well, I reply, you want to see the new search box…

We’ve added a search box that makes it easy to quickly find any tab or node. You can access it from the ‘Search flows’ option in the menu, or simply hit Ctrl+. (Cmd+. on Mac). As you type, it shows a list of possible matches, either click on the one you want, or use the cursor keys and hit enter.

The Import and Export dialogs have had a few small updates. When importing a flow, you can now choose to have it import into a new flow rather than the current one.

The export dialog gives you more options on what gets exported - whether the selected nodes, the current flow or all flows. You can also pick if the export should be prettified or minified. 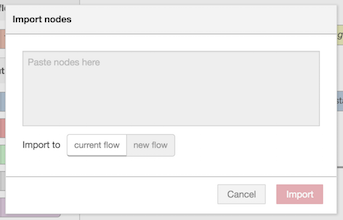 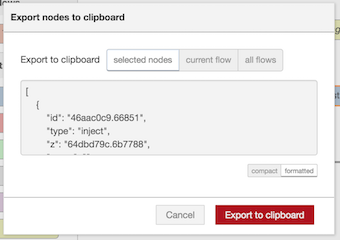 A couple of other new features on import:

We’ve always taken care to ensure any credential properties are not stored in the main flow file and put them in a dedicated credentials file. This means the main flow file can be version controlled without fear of leaking anything sensitive. However we can’t avoid the fact that credentials really need to be kept in sync with the flows and only version controlling one doesn’t make sense.

As we’re building up to adding version control support to Node-RED, we needed to do something to protect the credentials whilst enabling them to be version controlled.

As such, we now encrypt the credentials by default. This will mean you can no longer hand-edit the credentials file unless you choose to explicitly disable encryption. The exact details of how we do this are on the wiki here.

In anticipation of version control support, the /flows admin api has been updated to include a revision identifier along with the flows. When you hit the deploy button, the editor can now check if the flows in the runtime are those it loaded originally. Why is that useful? It means if someone deploys some changes whilst you’re still working on yours, the editor will warn you when you come to deploy. In this release, we give you the option to deploy anyway (over-writing whatever changes had been made), or cancel the deploy.

We’ve already started work on being able to see what changes have been made so you can merge them into your changes before deploying, but it didn’t make the cut for this release.

As the changes to /flows are not backward compatible, we’ve added a new custom HTTP header to identify what version of the API should be used. That means any existing use of the /flows api will continue to work, but can easily opt-in to the new behaviour. The documentation for this new api will get updated later this week.

Finally, we need to talk about Node.js 0.10. At the end of this month, it will no long receive any updates - including security updates. This end-of-life means it is hard for us to justify maintaining support for it. There is a growing list of modules that have already dropped support for both 0.10 and 0.12 which leaves us stuck if a critical issue was to be found in them.

The only reason we’ve held onto 0.10 for so long is the fact its the version that Debian Stable ships - and thus it’s the only version available as part of our Raspberry Pi preinstall image. Debian Stable isn’t due to update for quite some time yet, so we’re at a bit of an impasse.

Having explored a wide range of options we’ve made the decision that the 0.15 stream will be the last one to support node 0.10 and 0.12.

This means, for now, the Raspberry Pi preinstall will be fixed at 0.15. To make life easier, we already include a script on the preinstall image called update-nodejs-and-nodered that updates node.js to the latest LTS version using the NodeSource repositories and then reinstalls node-red on top. See the documentation for more information - including instructions for doing that upgrade manually if you so choose.

One of the more painful parts of the node.js world is handling binary dependencies. It can be a real headache when upgrading between versions to make sure such dependencies continue to work as expected.

We’re serving notice that in the 0.16 release we will be removing node-red-node-serialport as a default dependency.

That means we’ll no longer include the Serial node as part of the core install.

It will remove a lot of hardware/platform dependent code, speeding up the install time and shrinking the runtime footprint for users who have no need of the node.

It will also make upgrading more reliable as the serial port code will no longer be buried within Node-RED and can be upgraded just like any other node.

This will mean if you are using the serial port nodes you’ll need to manually install them after upgrading to 0.16 - we’ll share more details when we get to that release.

Keep a look out for some announcements next week… we have some exciting news to share!